We attended a very entertaining recital Sunday afternoon featuring flautist Sara Traficante and pianist Shoshana Telner with guest artist (and series organizer) cellist Rachel Mercer in the concert series, 5 at the First, which is in its third season at the First Unitarian Church of Hamilton. 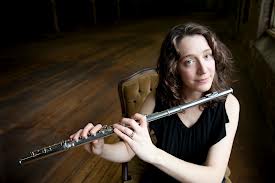 Concert programs require thoughtful preparation. It's not enough to prepare an appropriate amount of music, corresponding to the performers' desires. One has to present sufficient variety to engage both the performers and the audience. This is usually accomplished through choosing music in different styles and from diverse style periods (eg. Romantic, 20th C.)

As I perused the program I was struck that they had managed to plan a concert of mostly flute music without a single Baroque or Classical work. There would be no Trio Sonatas or International Style sonatinas.

I was eagerly looking forward to hearing the music they had chosen.

Later in the program they performed Phillipe Gaubert's Sur L'eau. Gaubert was an important flautist and conductor as well as a composer of, mostly, flute music. While the music is very much in the Romantic style, he lived until 1941.

Debussy's music was heard twice. Traficante played Syrinx, a short but  influential piece for solo flute. She stood far from the stage, as is customary. Telfer performed L'Isle Joyeuse, the solo piano showpiece, with appropriate exuberance.

Other music included Carl Vine's flute sonata. He is a prolific (6 symphonies) and highly successful Australian composer (of whom I had shamefully never heard) and I'll be listening to as many of his pieces as I can find. The music is constructed of tonal cells but is mainstream modern music, although not of the minimalist or series varieties.

They also played a  lovely short piece by Jacques Hétu, Aria opus 27, perhaps to include a little Canadian content.

Cellist Rachel Mercer joined them at the end of the concert for the work I had been most looking forward to hearing, George Crumb's Vox Balaenae (The  Voice of the Whale). Crumb was the star of American contemporary concert music in the early 1970s. I listened at the time to recordings of his pieces, like The Ancient Voices of Children, as I followed the huge, beautiful scores which combine conventional and graphic notation. I attended concerts of student works which were filled with pieces influenced by his. I was later amazed by a recording of the electric string quartet, Black Angels, played by the Kronos Quartet. Here it is played by Quatuor Béla.


His music is typically rather spare and requires instrumentalists and singers to employ extended techniques to elicit novel or unusual sounds. In this piece, the flute, cello and piano are all amplified. The singers wear masks and perform on a darkened stage.

Traficante sang as she played and later whistled and played glockenspiel. Telner played and plucked the strings inside the piano and used a metal strip to draw prepared piano sounds from her instrument. Mercer's part consisted mostly of overtones, although she and the other musicians did play a beautiful, lyrical passage in the concluding Nocturne section using the instruments conventionally.

The Crumb piece is very different from the others presented in this recital and, if only for that reason, was an appropriate choice. Any audience member who had never heard this sort of thing before was likely doubly impressed.

The problem, of course, is that much of the impact of pieces like this depend upon their effects. Unique ideas, whatever variety, are only unique once. That's not to say that this in any way negates the value of Crumb's music, but with what do you follow it?

Certainly the two of his prominent students with whose music I am familiar (Jennifer Higdon and Osvaldo Golijov) don't write music that sounds anything like his. Higdon, who won the 2010 Pulitzer Price for her Violin Concerto, is an American contemporary composer whose music is very eclectic and listenable. Jaime Sommerville and a Hamilton Philharmonic chamber orchestra did one of Golijov's pieces in a concert at Central Presbyterian last year and it was beautiful, lyrical and vaguely impressionistic. Neither composer's music reminds me of George Crumb's.

Having said that, the performers demonstrated courage and an adventurous spirit in programing Vox Balaenae.

In any event, I'd encourage anyone in the the Hamilton region with an interest in chamber music recitals to patronize this series. The performers are first rate, and, since the concerts are sponsored, the cost is only $15 for adults, a definite bargain.