Requiem for Peace with Orpheus Choir

I made the trek down the QEW to Metropolitan United Church in Toronto on Saturday night to hear a performance of Canadian Larry Nickel's doctoral work, The Requiem for Peace. I'd been impressed by some of the work to which I had listened on line and was interested in hearing the piece live for both aesthetic and professional reasons.

The performance was being conducted by Robert Cooper with whom I sang, as an undergraduate, in the Faculty of Music Singers (now UWO Singers) at what was then The University of Western Ontario (now Western University of Canada) under Deral Johnson.

The performers included the Orpheus Choir of Toronto, the MacMillan Singers from the University of Toronto (prepared by their conductor Hilary Apfelstad) and a seven player chamber ensemble consisting of flute, clarinet, oboe, harp, piano and two percussionists.

Solos were taken by the mezzo-soprano Michelle Sun and the eight Sidgwick Scholars, young singers who are the Orpheus Choir's leads.

The Requiem for Peace is in fifteen choral movements and two instrumental ones which introduce the first and second parts. The movements are in various languages (Latin, English, Hebrew, French, Russian, Dutch, German, Chinese, Japanese) and the texts are from the Latin Mass and assorted poets including Victor Hugo and Wilfred Owen to whose poetry Britten also set his War Requiem.

The Requiem for Peace was conceived for a large choir and orchestra. The pictures of the première look like a performance of Mahler's Eighth. Dr. Nickel created this reduced orchestra version of the work which was first performed by the Vancouver Chamber Choir of which he is a member. 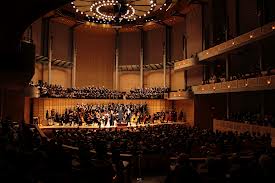 
The idiom is highly accessible. It's likely that only a few of the audience had listened to any part of this piece before, but it was very well received. Larry Nickel is an accomplished choral composer with scores of published pieces and dozens of recordings to his credit. This work, his longest and most elaborate, is a remarkable achievement.

The instrumentalists, all working professionals, played well and the choral preparation was first rate. English texts were not published in the program but,  most of the words were comprehensible, something which is often not the case in choral singing. Robert Cooper is to be congratulated.

Most of the soloists were merely adequate. It's not that they didn't sing accurately or that they had poor voices or technique, rather that this is a weighty work and, with a large choir, they simply hadn't sufficient presence. Baritone Tristan Jones and mezzo-soprano Jocelyn Fralick stood out among them. I'd like to hear this work again with older, more accomplished singers.

The performance was accompanied by projected images, compiled by Joan Nicks, an adjunct professor at Brock University. The pictures were chosen to fit the texts and enriched, rather than distracted from, the musical experience.

She also put together images to go with a fifteen minute segment of the CBC radio show Tapestry about the Requiem for Peace which was played before the performance. 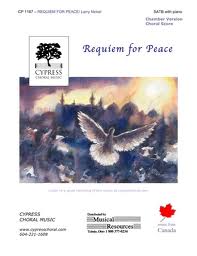