We took a short road-trip vacation to Eastern Ontario last week and I’d like to share some of what we saw and our impressions of the cities we visited.

We used to drive, a couple of times a year, to visit my in-laws in Montréal. It’s a 7 hour drive if you don’t speed much and the weather and traffic are clear. The Xmas trips were invariably terrible. I don’t think we ever made the trip without experiencing seriously inclement weather. Since my in-laws’ passing, we miss the joy of a family reunion but not the drive.

Consequently, my passenger and I prefer to drive in shorter bursts and stop along the way. I’m also not as determinedly miserly as I used to be so, in spite of the absurd cost, we took the 407, a toll road, coming and going.

I put the auto-cruise on 110 km/h and we were in Peterborough in 2.5 hours. We stayed at what is purported to be the best hotel in town. It really is in a “park-like” setting and was otherwise okay. There was a decent breakfast in the morning (hint: always look for an included breakfast when travelling anywhere) but the hotel doesn’t have a restaurant so, using Trip Advisor, we chose one and headed into town.

There is a restaurant strip downtown but a little research showed that most of the establishments closed up in the late afternoon. We’re not much interested in burgers, sandwiches and pizza so we ended up at a recommended Middle Eastern place which had good food, at a reasonable price, but was really a take-out with a half-dozen tables. Can’t say that Chicken Shawarma on styrofoam would be my first choice…

A interesting detail of our visit is that there is a small tent city on the grounds of two downtown churches, accommodating the city’s homeless. I checked the local newspaper later and discovered they’d been evicted from a downtown park at the beginning of September and the occupants took up the offer to move into the nearby church yards. Dozens of marginalized people wandering the downtown and pan-handling at the LCBO and Beer Store don’t do much for Peterborough’s downtown’s appeal and city council knows it. The opioid crisis has hit this city hard.

The good news was the Peterborough Art Gallery where we saw a show of paintings by Eugenie Fernandes. She’s 78 now and has had a career as an author and illustrator of more than 100 published picture-books. There were 26 contrasting acrylic paintings in the show, each accompanied by an short, poem with an alphabetized title. A native New Yorker, she now lives in a “glass house” in the countryside nearby Peterborough, with her husband who was a long-time artist for the Sesame Street franchise.

Early and fed, the next day we set off for Ottawa along Highway 7. It’s a nice drive on a primarily two-lane road bordered by pines, poplars, some hardwood stands and a few picturesque lakes. One slows and drives through towns on the way. This year there were hardly any trees showing autumn colour.

I’d chosen a downtown hotel for access to the sights for which we’d come. I'll stay on the outskirts and commute in next time.

I missed the lobby and had to circle the hotel before I finally gave up and entered the underground parking. We found the lobby from there and checked in. Very helpful desk staff. The room was small, compared to suburban hotel rooms, most of the floor space occupied by the king sized bed. Microwave and an inefficient fridge. A huge television with proper HD service on almost all the channels. A desk, but no desk lamp. Other lamps wired into the wall so they couldn’t be moved. Real glass glasses, but only 2. The shower handle was loose and came off in one’s hand. Seriously?

We spent the afternoon at the National Gallery. If you’ve never visited it would be worth a look even if there were no paintings. It’s a huge glass building that echos the towers of nearby Parliament Hill. It was designed by Moshe Safdie who also designed Habitat 67 at Expo 67 in Montréal. 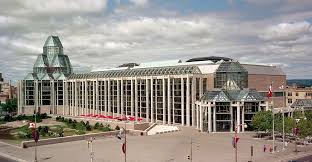 I visited one of the paintings that started me off in the appreciation of fine art, Dante Gabriel Rossetti’s The Salutation of Beatrice.

We only took in the European and American collection this time. The gallery has the largest collection of Canadian artists in the world. We did spend some time in the Rideau Street Convent Chapel. The chapel was declared a historical monument and taken apart and put into storage in 1972 when the convent school was demolished and all 1123 pieces were reassembled inside the new National Gallery in 1988. 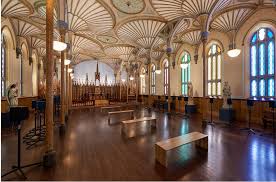 It turned out that the hotel didn’t have a proper restaurant. The bar became one in the late afternoon and early evening, I supposed becoming a bar again later. Typical roadhouse fare for the most part. I visited a couple of other downtown hotels and it was pretty much the same story. The few restaurants within walking distance of our hotel and that are open in the evening are more interested in selling beer than food, judging from the menus. Who'd have thought downtown Ottawa is a fine dining desert? We ended up eating burgers in a hotel restaurant that had only a small bar.

The next morning I went for the West Block tour to see the new Commons chamber. The site directed me to the new tourist office so I went expecting to see a pre-fab building since the Centre Block is being renovated and is closed to tourists as is the Parliamentary Library which is beautiful and the only part of the original Parliament Buildings which didn’t burn down in 1916.

I was very surprised to discover the new tourist office is a permanent, subterranean complex which includes a large and very stylish tunnel to the West Block. There is serious security, very much like in an airport although the employees are much less stressed and much more polite than any airport I’ve ever encountered.

The tour was worthwhile as I got to see what I came to see. The tour guide asked the group of about 25 where they came from and at least half were not from Canada. The spiel from the tour guide was quite a lot like my Grade 10 Civics class. “Canada has a bicameral parliament. That means…” When we visited a committee room he talked about the role of Parliamentary committees. I certainly didn't learn anything. 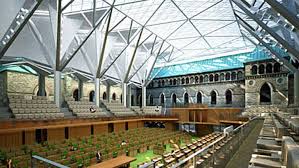 I did learn, from one of the security guys, that the structure inside what had previously been a courtyard is not connected to the building at all. The steel pillars including those in the corners, which are outside the chamber itself but within the courtyard, support the roof. It could be taken down eventually but the renovations to the Centre Block will take at least ten years.

We then headed off, down the 416 and across the 401 to Kingston. Hotel near the highway this time. We spent the afternoon on the Queen’s campus. The buildings are mostly neo-Gothic like so many North American universities, but city streets run directly through the campus unlike other universities with which I am familiar. Only McGIll is anything like it in my limited experience. At three in the afternoon the streets were crowded with students headed to where ever they presently call home. It seemed there were many more girls than boys just as the statistics on university attendance tell us.

We saw a beautifully curated show of a few Rembrandt paintings, and some etchings at the Agnes Etherington Art Centre. There were also etchings and paintings by his students and teachers. There was also a costume exhibit that had several Canadian paintings (i.e. Leduc, Borduas, etc).

We ate at Eastside Mario's, pizza and pasta. By then we’d given up on fine dining.

The hotel was, again, okay. This is important to us, as our rhythm is to be out and about all day and rest in the evenings. Why they put big screen TVs in the rooms but don’t spring for HD service is beyond me. All the images are stretched sideways. Everybody seems overweight or like a Tolkien dwarf.

The drive home was uneventful although the exit to the 412 tollroad that leads to the 407, in the midst of serious construction, appeared with no warning at all.

So I got to see lots of important art and the temporary Commons chamber but didn’t get to sample any really decent restaurant food whatsoever. The weather was perfect for long walks to get to the various attractions but I watched a Blue Jays game on TV that would have been better at home. Oh well.