The Nightingale and Other Short Tales at the COC

When I returned home from yesterday afternoon’s (May 12) performance of The Nightingale and Other Short Fables I was asked what I thought. I said I needed to think about it. I’ve done that and I have learned a valuable lesson from Robert Lepage et al.

At the outset, I knew pretty much what I was going to see and hear. The show is iconic. The water in the pit, the puppets and the rest of the gimmicks have been documented in videos and elsewhere. The “other fables” are not operatic pieces: never were and were never intended to be.

I have my prejudices, though. When I go to the opera I expect to see… opera. I don’t like it when directors reset operatic pieces in the wrong period or otherwise play with conventions. Opera directors and other opera professionals are steeped in these pieces. They know them inside-out and have seen them numerous times. They're looking to do something different than they've seen before. Subscribers only see them, even the pot-boilers, once ever few years so don't need to revisit them differently. Moreover, most resettings don't serve the story, they don't add anything to the audiences' comprehension of the drama. Sometimes, as we saw recently in the COC's Abduction, they only serve the director's personal agenda.

And an opera performance isn’t a concert. I know the difference. I attend concerts, orchestral, choral and otherwise.

The musicians are on stage in this show, behind the singers, acrobats and puppeteers. The music of the first half is nine Russian Period Stravinsky pieces only one of which, The Fox, is explicitly dramatic. They are scored for various chamber groups. So it’s essentially a concert with costumed singers standing in front of a varying group of instrumentalists, supplemented by audio visuals. 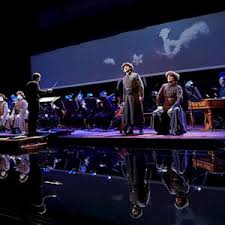 The Nightingale is an actual one act opera in three scenes. The device here is that most of the singers carry an avatar, a small puppet representing themselves. From my vantage point at the front of the Fourth Ring, however beautiful those puppets are up close, they were two small for me to see clearly. I have no doubt those sitting in the front of the orchestra had a much different experience. 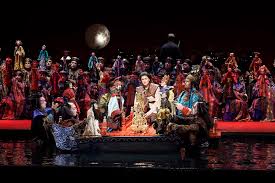 As I’ve come to expect in COC productions the playing, singing and acting were exemplary. There’s a huge orchestra for The Nightingale whose orchestration ranges from full-blown to very very sparse in the manner of Stravinsky’s then contemporaries Debussy and Mahler. I especially enjoyed the women of the chorus singing the Four Russian Peasant Songs with horn quartet, some of them with their feet dangling off the front of the stage in the water. Among the solo singers Owen McCausland who sang in the quartet of men in The Fox and returned as the Fisherman in The Nightingale was outstanding, as was artist-in-residence Jane Archibald as the Nightingale herself. But really, all the singing was first-rate. We also got to see and hear clarinetist Juan Olivares, in costume, play the 3 Pieces for Solo Clarinet.

At what conclusion have I arrived? Crabby David was all negative because the first half of the show isn’t an opera. It’s a concert. But is it? There is other stuff going on all the time. Performers do a shadow show illustrating some of the stories. Acrobats move and dance with shadow puppets behind a back-lit screen. They are real, live performers aided only by the lighting. This is theatrical. It’s not opera but it’s theatre and opera, too, is supposed to be theatre.

If it had been a concert, just a concert, would I have enjoyed the music? Certainly! Excellent performances of pieces I’m unlikely to hear otherwise? What’s not to like?

So once I let go of my prejudices and just judged this unique theatrical experience for what it was, I discovered I don’t have a problem with The Nightingale and Other Short Tales. The first half is varied, interesting and engaging. Some of what was presented in that water-filled orchestra pit in the second half was not gimmicky but beautiful, entrancing and, sometimes, frighteningly chilling. The presentation is a collection of theatrical effects which enhance the music and acting, thanks to the genius of Robert Lepage.

There are three more performances, one this very afternoon (May 13/2018) and yesterday’s performance was far from sold out.