Anna Bolena at the COC

Yesterday afternoon (May 20, 2018) we went to see Anna Bolena performed by the Canadian Opera Company at the Four Seasons Centre in Toronto.

We included this opera in our package with some trepidation. As I wrote then, we weren’t very impressed with Diva Sondra Radvanovsky in Roberto Devereux and went to see Norma with the second cast to avoid hearing her again.

Anna Bolena, however, was an opera I was anxious to see. I was a COC chorister in 1984 when Dame Joan Sutherland sang the leading role with James Morris as her Enrico and Judith Forst as Giovanna Seymour. It was a stellar cast and a memorable production. I wondered how much my memory of those performances would affect my perception of this one.

Very little, it turns out. I didn’t even remember the chorus numbers (which I had obviously memorized) although much of Anna’s music came back to me as La Radvanovsky sang it. Her voice and interpretation were so different from Sutherland’s that my remembrance of those long ago performances mattered not at all.

The Sondra Radvanovsky we heard four years ago seems to have been a different singer than the one we heard yesterday. Maybe she has since spent some time with her teacher. Maybe she was just having a bad day then.

Anna Bolena is a long and dramatic sing in the midst of a very long opera. But Radvanovsky had it well in hand. Some of her singing in the opening scene was a little under pitch especially when she wasn’t singing full out but all of this disappeared once she was properly warmed up. The coloratura was crisp and clear. Her highest notes really are almost unbelievably loud and beautiful. She’s also a very fine actor which just adds to the overall effect. The Mad Scene was very effective and full of touching details.

American Bass-baritone Christian Van Horn played and sang a wonderful Enrico. As a singer he is absolutely rock solid, fearless even. He has the bright placement of a baritone on top and the buzz of a real bass on his lower notes. He’s also a really good actor, which is critical in portraying this despicable character. He even brought that to the curtain call, gesturing to the audience to continue applauding him.

Keri Alkema, as Giovanna, matched Radvanovsky and Van Horn well in their respective duets. She’s not the actor that either of them is and seemed a little wooden compared to them on stage. She has a big, beautiful voice but has a rather wider vibrato than is ideal for in this music as it sometimes obscured the clarity of the fast moving coloratura passages.

Bruce Sledge, who has, in common with the other principals, a long, successful international career, is also not as convincing an actor as Radvanovsky or Van Horn but sang Percy’s high and demanding music nearly flawlessly.

Allyson McHardy, who sang with Radvanovsky in the aforementioned Roberto Devereux four years ago, sang the page Smeton. This role, really a contralto one, provides a really contrast to the two leading ladies who, in this performance, switched-off the high part in this duet. She portrayed convincingly a very young and foolish young man and sang his music, which has little of the pyrotechniques of the other two women’s music, very well.

It was great to see and hear my U of T Opera Division classmate Thomas Goerz as Rochefort, Anna’s brother. He sang this part very nicely and acted notably especially after being tortured in the penultimate scene.

The set is interesting, a kind of semi-cirular rotunda with two galleries high above the stage. The sections on the stage are on wheels and, by pushing them about, one is able to give a variety of looks. The costumes are colourful, period appropriate and effective. 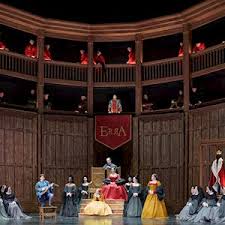 Conductor Corrado Rovaris held the whole performance together, keeping the orchestra with the singers who sometimes need some flexibility in Bel Canto operas like this one. The chorus and orchestra were impeccable as usual. The women’s chorus in the second act, sung from galleries high above the stage, was especially beautiful.

The direction was generally adequate aside from a couple of notably cringe-worthy moments: One when Percy, for no understandable reason, throws Anna on her bed and apparently sets about raping her, mercifully interupted by Smeton, and, later, a tug-of-war between Anna and Enrico with their daughter, Elizabeth, as the rope.

Including Elizabeth, as a character in this opera is, I suppose, dramatically interesting. But Donizetti’s librettist didn’t and seems implausible that a child of three would have been present in such scenes. Incidentally, the yawning extra who played Elizabeth looked to be about 10 years old.

In any event, there a couple of performances of this show left on May 24 and 26.

If you’re interested in Bel Canto opera this production is as good as any you are likely to see anywhere in the world and you won’t have to brave Pearson Airport to see it.