Norma at the COC and Mystical Landscapes

Last night (Wed. Oct 26) we attended the performance of the Canadian Opera Company’s production of Bellini’s opera, Norma, at the Four Seasons Centre in Toronto.

Altogether the show was a more than adequate but less than transcendental version of this much beloved piece, but still worth the hike down the QEW to the Big Smoke.

The opera is set in Gaul in 50 B.C.E. and in this production actually takes place there and then as the librettist intended. I mention this because we have been present at performances of operas whose setting and period were changed, not always to happy effect.

We intentionally avoided hearing Sondra Radvanovsky in the title role, in spite of the accolades which have been thrown her way. She was similarly praised for her interpretation of Elizabeth I in Roberto Devereux and we were disappointed as I wrote then.

The Norma this night was Johannesburg native Elza van den Heever. She sang all the words and notes and acted pretty well this uniquely demanding role. She studied in San Francisco and her career was launched when she won the 2008 Seattle Opera International Wagner Competition. She is having a great international career singing a wide variety of roles and styles.  Norma isn’t her cup of tea, though. A German approach still colours her bel canto singing. She doesn’t manage the line and evenness which is at the heart of the style. One reviewer described her as “a young Joan Sutherland” and that person must never have heard Dame Joan. (I did, from close up, on numerous occasions as a COC chorister.)

Mezzo Isabel Leonard, as Adalgisa, did the best singing of the evening and has a more even production and ability to execute the bel canto style than den Heever. I think she took the reserved temple acolyte a bit too far in her acting which was far too restrained but that could have been a directorial decision.

Tenor Russel Thomas sang Pollione and acted effectively. His repertoire is dominated by rather heavy tenor roles like Don José, Turiddu and Florestan. That’s the way he sang this Bellini role which is written nothing like the tenors in La Sonnambula or I Puritani. His approach, however, led to trouble with his really high notes (i.e above an A)  which were pushed and unpleasant.

Dimitry Ivashchenko, as Norma’s father, the high priest of the Druids, was unreservably excellent with a marvellous voice and convincing stage manner, rivalling Leonard for best singing of the evening.

The chorus was brilliant, especially in the breathtakingly fast “Guerra, Guerra” chorus.

The orchestra (conducted by Stephen Lord) and off-stage Banda (conducted, I presume, by my old boss, Derek Bate) were excellent as usual although the pit orchestra did overwhelm quiet singing by the principals on some occasions.

In closing, we also took in the Mystical Landscapes show
at the  Art Gallery of Ontario. It’s a must for anyone with more than a passing interest in visual art. The admission is considerably less than you will have to pay to get to its next stop at the Musée d’Orsay in Paris. It includes some really stunning pieces by Monet, Gaugin, Van Gogh and some lesser known artists including Eugene Jansson, four of whose big pieces make him my favourite previously unfamiliar artist. 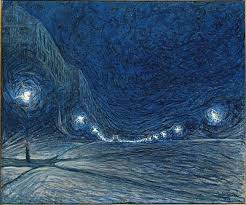