in Hamilton last spring, Vox Metropolis presented their newly composed soundtrack to Sherlock Jr., while the 1924 Buster Keaton film played and a short second half of varied repertoire. 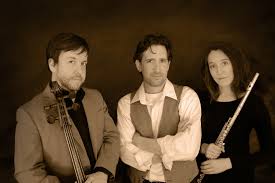 I missed that one, so I went Saturday (Oct. 4) to Maple Grove United Church in Oakville to hear another presentation of a similar program.The Hamilton based classical and crossover trio group, composed of pianist David Jones, flautist Sara Traficante and cellist Kirk Starkey, are in the midst of a Southern Ontario tour. They are all multi-instrumentalists.

Buster Keaton was an actor/director who made a series of very successful silent comedic films in the 1920s of which Sherlock Jr. is one. This movie is short on plot but filled with truly amazing stunts and effects. Keaton conceived, planned and executed all of his own stunts, many of them truly death defying. It’s amazing he survived. He fractured his neck doing one of the stunts in Sherlock Jr. and, apparently didn’t notice.

Silent films were originally accompanied by a pianist or organist who watched the screen and played music from a standard set of memorized  pieces whose mood fit the action. Sometimes music was improvised to suit the scene.

Modern film scores are composed after the movie has been cut, that is when it is nearly finished. This score is of the modern sort.

The music, by David Jones, is as ecclectic as any piece you are likely to hear. It ranges from ascending passages of diminished seventh chords, exactly as you might have heard from a theatre pianist or organist 90 years ago, to an original waltz tune, some very jazzy passages, a nod to musical modernism with some quartal harmony, all neatly stiched together into a coherent whole.

There was considerable “Mickey Mouse-ing”, the technique in which the music moves in sync with the action on the screen. Anyone who has every watched Wile E. Coyote and The Roadrunner will know what I mean.

Jones played piano and two different organs. Starkey played cello and guitar. Traficante played flute and performed the sound effects (train whistles, for example), although she plays alto saxophone in another of their concerts. All of this added variety to the texture.

You are not usually intended to be aware of movie music. It plays in the background and supports the film. This is a little different with the performers in plain view in front of the film. I’ll admit to losing track of the music sometimes while laughing at Keaton, but that’s what is supposed to happen with film music.

The second half started with a two movement Haydn trio. The music took off at breakneck speed and I was reminded of what accomplished performers these three musicians are. Each played briliantly in the familiar idiom of the European International Style which was ubiquitous in the second half of the 18th century.

They followed with Jones’ arrangement of Over the Rainbow, more properly a jazz fantasy. What a beautiful piece it is, taking this familiar, simple song and turning it on its head through changing metres and variation!

They finished the concert with a transcription/arrangement of Chick Correa’s Spain. Jones displayed his awesome jazz credentials, Starkey and Traficante keeping pace. The latter encouraged the audience to sing back the pianist’s phrases in the last section, involving everyone in the performance.

Vox Metropolis keeps innovating in yet another genre, pop music. You can hear them in this video accompanying Yer Yard, in Tunnel to the Reservoir.

I’d encourage readers to find the trio on Facebook and get out to hear them (and watch a film) when they come to a venue near you. Bring your kids.
Posted by David S. Fawcett at 12:57 PM