Chopin and Beethoven at the HPO

We went to hear the Hamilton Philharmonic Orchestra’s inaugural concert of the new season on Saturday evening (Sept. 19, 2015) in the Great Hall at Hamilton Place.

The program was in keeping with the seemingly standard form of symphony concerts hereabouts: a short Canadian work, a concerto featuring a well-known soloist and an 18th or 19th Century symphony.

On this occasion the Canadian work would be Robert Rival’s Spring. Concerto soloist Janina Fialkowska would play the Chopin Concerto No. 1. The orchestra would play Beethoven’s Fourth Symphony in the second half.

Rival was the Edmonton Symphony Orchestra’s Composer in Residence from 2011 to 2014. He holds a Doctorate in Composition from the University of Toronto and is presently on the faculty of Queen’s University in Kingston, Ontario. Spring, a short work for string orchestra, was written for the Ottawa Youth Orchestra in which the composer used to play violin. Rival writes in a very approachable tonal style. The opening motive even recurs as the subject of a fugue in the first section of the work. Spring was an unusual choice to open one of these concerts, which usually start with lots of brass and percussion, but it is an effective work by a composer who writes capably and idiomatically for strings.

Pianist Janina Fiaklowska, an Officer of the Order of Canada, daughter of a Montréalaise mother and a Polish father, has an illustrious professional career now stretching back through 40 years. She played with the Montréal Symphony at the age of 12 and won the first Arthur Rubinstein Master Piano Competition in 1974 which launched her professional career with Rubinstein himself as her mentor. 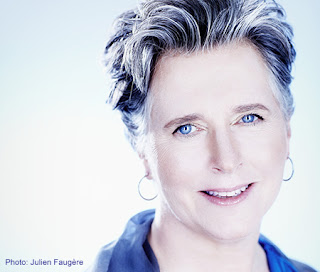 Through her long association with Chopin’s music, she must have performed this concerto dozens of times and that was in evident during this concert. She manages to make the long, running, chromatic scale passages that punctuate the phrases sing like coloratura. Her use of rubato is masterful and the clear, ringing passages of thirds, not to mention the extraordinary double trills, reflect a remarkable technique. By the energetic third movement rondo she was clearly enjoying herself. This was a fine opportunity to hear this unique performer.

The balance was sometimes off, the orchestra rendering the left-hand of the piano inaudible from where I was sitting. The orchestral tuttis are pretty bombastic compared to the lyricism and sophistication of the piano passages but that’s just Chopin, who wrote no other orchestral music than that of the two piano concertos.

After the intermission the orchestra performed Beethoven’s Fourth Symphony. The even numbered symphonies are, on the whole, less dramatic than the odd numbered ones and are, consequently, less often performed. This is a pretty sunny piece.

The conductor for this concert, Bernhard Gueller, has been the Artistic Director and principal conductor of Symphony Nova Scotia since 1992. He had previously been the conductor of the Cape Town Philharmonic and the Nuremberg Symphony.

It was a spirited performance but not a very convincing one. The orchestra played the piece well enough. The dynamic contrasts were there as were the written articulations. The mood was pretty much the same throughout, however. The orchestra began a heavily accented dance after the slow, mysterious introduction to the first movement and carried on with it through the entire symphony, including even the slow movement. It was unrelievedly of one colour, lacking nuance, and might even have been boring if it hadn’t been Beethoven.

There are eight concerts left in the HPO’s 2015-16 season. Of particular interest, the orchestra’s new conductor, Gemma New, leads the orchestra in the Shostakovich First Symphony and the Third Prokoviev Piano Concerto on Feb. 6, 2015.

Hamiltonian popular musician Ian Thomas joins the orchestra for A Life in Song on October 17.
Posted by David S. Fawcett at 5:20 PM