The Wonder of Richard Strauss

One of the benefits of being a HPL user is Freegal music downloads. I get 3 free MP3 files each week from an enormous selection. The "search" function is very clunky and it can take a long time to find things but free is free and you don't want to be wasting iTunes downloads on music you're not sure you want to listen to repeatedly.

Since you only get 3 tracks a week, I often look for long pieces or movements. It'd take you months to get the entire Rachmaninov "Rhapsody on a Theme of Paganini" since each of the 24 variations counts as one selection even though some are only a minute long.

Last week I downloaded 3 of Strauss's Tone Poems: Also Sprach Zarathustra, Don Juan and Till Eulenspiel, pieces I'd been meaning to listen to again for a long time.

Strauss was a highly capable, imaginative and detailed orchestrator. He wrote for a large orchestra which requires many string players both to balance the winds and because he so often writes divisi passages, especially for the 'cellos. Unlike Mahler, his contemporary, who frequently uses spare textures in the midst of his symphonies, Strauss usually writes for many players at any given time. He manages so much variety that the orchestrations are never boring. 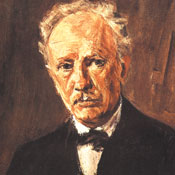 
Richard Strauss had an extraordinary musical life. The son of the principal horn player in the Munich Opera Orchestra he attended rehearsals there as a child. Hans von Bülow was impressed with a Serenade for Wind Instruments which Strauss wrote when he was 16 and took Strauss on as his conducting apprentice when he was 18. He composed, conducted and (beginning in the 1920s) recorded a great volume of music. He died in 1949 at the age of 85. 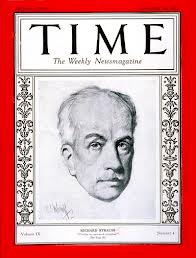 Strauss twice made the cover of Time Magazine


Strauss the composer is perceived differently by different audiences because he was so prolific and worked in different genres.

For orchestral music buffs Strauss is known as the composer of eight virtuosic tone poems, 2 Horn Concertos, an Oboe Concerto, the Suite Le Bourgeois Gentilhomme and other pieces.

Opera fans know him as the composer of some 15 operas, about half of which are still performed. A few (Salome, Elektra, Der Rosenkavalier, Ariadne auf Naxos) are in the standard repertoire.

Song aficianados love his lieder, written throughout his career, many of which are orchestrated.

By 1909 when he was composing Elektra, the musical winds of change were blowing strongly and  Strauss used a more "modern" harmonic vocabulary in addition to the leitmotives he had inherited from Wagner.

When I first encountered this opera in a 20th C. analysis class the music made me queasy as it wandered from key to key. Later, I watched 4 live performances at the COC (with Maureen Forrester making a spine tingling entrance as Klytaemnestra) and enjoyed it enormously, especially since this was the first COC production to include Surtitles.

It occurred to me years ago that, with Elektra, Strauss looked over the edge of the precipice (a precipice over which Stravinsky among others would enthusiastically jump a few years later) and decided he didn't want to go there. With his next opera, Der Rosenkavlier, he returned to the high romantic style which had served him in the tone poems and he pretty much stayed there for the next 40 years.

In any event, take some time to listen to some of Richard Strauss's music in the genres with which you aren't familiar. These three works will get you started.

I met Till Eulenspiegels lustige Streiche in excerpts as a baritone horn player in high school band. The original sounds better.

Some people claim this trio is the most beautiful music they've ever heard. Strauss certainly loved to write for sopranos. This is from a 1960 film with Elisabeth Schwartzkopf in her signature role as the Marschallin.

Finally, the last of the Four Last Songs, Im Abendrot, written in 1948. I looked for video with Jesse Norman but could find only audio recordings. This is pretty
nice though. I wasn't familiar with Soile Isokoski, the Finnish soprano who sings here, but she's having the "big career".