Roberto Devereux at the COC

We saw Roberto Devereux at the Four Seasons Centre last night (Tues. April 29) and, in the immortal words of Jerry Lee Lewis there was a "whole lotta shoutin' goin' on". Perhaps not actual shouting, but too close for this opera goer.

I hadn't heard or seen this opera before, but with surtitles and a familiar composer (Donizetti) working in a standard form, preparation proved to be unnecessary.

It was presented on a single set, meant to evoke the Globe Theatre. There was a large platform that occupied most of the mid-stage around which most the action took place. This forced the singers to its periphery most of the time, either on the sides or right downstage. There was, as seems usual, some singing while lying down. At one point Devereux, in a duet with Sara, for no reason I could fathom, dragged himself across the platform as if his legs didn't work. In another peculiar choice, Nottingham apparently goes on to rape his wife after the end of their duet. I could also have done without the manikins in display cases during the overture and at the end of the opera. 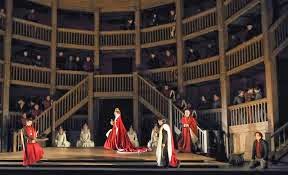 This is an opera in the bel canto tradition. The phrase means, literally, beautiful singing but refers to much more than that for example, evenness and clarity of sound and articulation and tasteful absence of excess. What we heard in Hercules was bel canto. Much of what we heard last night was more appropriate to Trovatore or dare I say Tosca, far too heavily influenced by the style of singing that became acceptable later in the 19th century. Donizetti may not be Rossini, but he's not Verdi either and is surely not a verismo composer.

The main culprit was the prima donna, soprano Sondra Radvanovsky as Elisabetta. She has spectacular high notes and the ability to project her chest voice. She also has a middle voice which is not as strong. As a result, in a long descending octave scale, the top and bottom were loud while the middle didn't match. Moreover, last night at least, she wasn't able to manage the crispness and accuracy which the frequent coloratura in this repertoire demands. It simply sounded messy.

She is, however, an exceptional actress, and in the last act, when the coloratura pyrotechnics were over and the music was more dramatic, her vocal issues were no longer a problem. Indeed, she did some glorious pianissimo singing. The last scene, artificial and manipulative as it is, and made more so by this production, was truly moving and drew well deserved approval from the audience.

As the Duke of Nottingham, Baritone Russell Braun's singing in the first act suffered from similar problems. At one point, in the midst of some running passages, I actually lost track of what key he was singing in. Again, the runs were not clean and accurate while the highest notes were stentorian. I've heard him sing other repertoire beautifully and he has never sounded like that.

Tenor Leonardo Capalbo sang pretty well the taxing title role sounding like... an Italian tenor. He sings duets with both leading ladies and in ensembles besides, having to maintain a rather high tessitura throughout. He was obviously tiring by his final act scene, and no wonder.

Mezzo Allyson McHardy, as Sara, Duchess of Nottingham, came closer to bel canto than the other principal singers. Her first aria, in particular, was a breath of fresh air after Sondra Radvanovsky's. She did seem to be darkening and pushing on her lower notes as the performance went on and I wondered whether she and Braun felt the need to be louder to match the big sound Ms. Radvanovsky can produce. I think I'd like to hear McHardy as Cenorentola or Rosina in this theatre.


Owen McCausland sang Lord Cecil nicely and Matt Boehler made some of the loveliest sounds of the evening in the few notes he had to sing as Raleigh.

The COC chorus sang well what little was asked of them and the orchestra played beautifully under conductor Corrado Ravaris.

The audience reacted rapturously at the end of the performance and I wondered whether they were wooed by the theatricality of the piece. I am more concerned with musicianship and singing and didn't stand at the end of this one.

Nonetheless, this production of Roberto Devereux should put bums in the seats. Judging by next season's offerings, heavy on the standard rep (Madama Butterfly, Falstaff, Barber of Seville, Don Giovanni) and Bluebeard's Castle, a proven hit, the company must have decided to concentrate on pot-boiling. Gotta pay the bills.
Posted by David S. Fawcett at 4:11 PM