We attended the current COC production of Verdi's Un Ballo in Maschera Tuesday evening at the Four Seasons Centre in Toronto. Nothing like a great Italian opera to warm a chilly Ontario evening. Lovely theatre, a promising cast, a full house. What could possibly go wrong?

So far as the music was concerned, nothing much. All of the principal singers were as good as you'd get in any major opera house. The orchestra, under Maestro Stephen Lord, played excellently and Sandra Horst's chorus were first-rate once more.

The combination of Barbara Ehnes set design and Jossi Wieler's stage direction, however, resulted in a bizarre night at the opera.

All three acts were played in what pretends to be the ballroom of a Southern American hotel in the 1960s but looks more like a garish snack bar in a bus terminal. The same set serves all three acts. It is the witch Ulrica's cave only by moving the furniture about and, with the addition of a couple of dangling lynched corpses, it serves as the gallow's field as well. 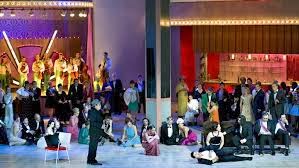 The action has been transplanted to the American South. The direction alters numerous elements of the opera as it would be performed in a traditional production including lots of silly or distracting stage business. Conte Riccardo and Renato are best buds complete with a "cool" hand slapping handshake. Oscar (a young man in Somma's libretto) is transformed into a flirty young woman who, in Act Three, is costumed in a version of Björk's notorious Swan Dress.


The cast includes a mute woman in Jackie Kennedy-esque dress, complete with pillbox hat. She's Riccardo's invented wife but, not having read the director's notes, I spent most of the opera musing on who she might be and what she was doing in this opera. When the men "disguise" themselves to visit Ulrica they take off their jackets and ties and roll up their trousers to their knees. In the ballroom cum gallow's field scene, everyone is in their pyjamas or nightwear. The blind Ulrica turns up, with an open bottle of spirits, at the masked ball with her sight miraculously restored.

American tenor Dimitri Pittas was a bright-voiced Ricardo. He sang well but was tiring by the solo aria Ma Se m'é forza perderti when there was some insecurity in his high notes. The idea that misfortune is more grievous when it befalls those of high estate is integral to tragedy. In this production Ricardo may be rich and powerful but, on account of the direction, including some cringe-worthy buffoonery, and his aspiration to betray his wife, he lacks nobility. This weakens the drama.

Roland Wood was a vocally excellent Renato and dramatically convincing within the confines of this production. His singing of Eri tu che macchiavi quell'anima was very impressive and his sound sometimes reminded me of Louis Quilico. (Sorry to those of you for whom this is sacrilege.)

Simone Osborne shone as Oscar. She made the transformation of this role from young man to young woman work. She sang beautifully in both arias and demonstrated lots more juice in the ensembles than most soubrettes who sing this role. I found the amount of silly stage business she was required to do while other characters ought to have been the centre of the audiences attention distracting, but that's hardly her fault. I heard her last as Gilda in Rigoletto and she proved last night that she is a versatile actress as well as a fine singer.

Adrianne Pieczonka was breathtaking. Amelia is the only one who is allowed to be a tragic character in this production and the soprano was a startling contrast to everyone else on stage in spite of having to play most of the show in pyjamas and a robe. She managed to be believable in the midst of the absurd set and staging. This is her first outing in this role and she really did sing magnificently. It seemed that she never had to sing louder than mezzo-forte to get it done while some other singers competed with the orchestra. Her pianissimo singing was chilling.

It is my contention that if a work of art requires explanation from another medium to be understood, it lessens its import. Art works ought to be able to be fully comprehended on their own terms without justification. This production requires the audience to have read the Director's Notes for it to make the effect the director intends and, even at that, it didn't work for me.

Much of what unfolded on stage last night simply didn't ring true. Perhaps it worked better in Europe, where the production originated, where America is much more foreign than it is here and the incongruities might be less obvious...

You can't fault the COC for trying to be innovative and keep up with current trends in opera at other major international houses. However, I'm not inclined to spend big bucks to see "contemporary reinterpretations" that are as far off the mark as this one. I'll think hard about attending any Robert Carsen directed shows having been so disappointed in the bland production of Orpheo ed Euridice in 2011. I guess I'll add Jossi Wieler and make a list.