Peter Grimes at the COC

We attended Tuesday night's performance of Benjamin Britten's opera Peter Grimes, performed by the Canadian Opera Company at the Four Seasons Centre in Toronto. The performance was not sold out. Indeed, the audience thinned out somewhat as the evening went on.

I'm not very fond of Britten's music (in spite of having performed quite a lot of it) and find the subject of this opera to be rather dreary. Britten adopted a kind of pan-diatonicism, gleaning his harmonic materials from the notes of his melodies and then adding polytonality (playing different streams of the texture in different keys). This results in music which is at once tonal and curiously harmonically static. To my ear, the music often doesn't have a clear tonal direction. You can hear this clearly in The Four Sea Interludes, adapted from the opera, which are a staple of the Twentieth-Century orchestral repertoire. Productions of the opera are mounted at major opera houses about as often as those other 20th Century operatic masterpieces, Poulenc's Les Dialogues Des Carmelites and Stravinsky's The Rake's Progress.

On this occasion, all three acts were played on single set (the back wall of which is brought forward on the stage at one point). The set represents a church hall with a raised proscenium stage at the back. It looks very like a church or community hall or even an elementary school gymnasium but has windowed doors and clerestory windows on both sides and skylights in the ceiling allowing for very effective lighting effects, especially during the interludes in the opera.

The director's conceit is that George Crabbe (played by Thomas Hauff), upon whose poem the libretto is based, is there on stage imagining his poem coming to life and sometimes even interacting with the characters.


Last night, Tenor Ben Heppner took the title role. He had cancelled the première and wasn't in very good voice for last night's performance either. He warmed into it as the evening went on, though, and sang pretty effectively in the second and third acts. The role is a demanding one from a dramatic point of view and his acting certainly didn't suffer from whatever vocal discomfort he was experiencing. His portrayal of Grimes mad scene in the third act was very powerful.


Soprano Ileana Montalbetti was cast as Ellen Orford. According to the program notes this is her first really big role. She was a dramatically effective Ellen and sang much of the role proficiently, especially when singing alone or with the orchestra, although much of it was full out. The broad vibrato of her top notes battled with Heppner's in their first act duet and affected the tuning of the women's quartet (with Auntie and the two nieces). She possesses a fine instrument, however, and I look forward to hearing her in other repertoire where this characteristic of her vocal production will be less critical.


Bass-Baritone Alan Held sang and portrayed Captain Balstrode, Grimes only friend, and was the outstanding individual performer of the evening with a strong voice and excellent dramatic skills. He's done big Wagner roles in major houses and it was clear from his performance that he'd be at home there as well.

I was also impressed with Peter Barrett playing Ned Keene, although all the singers playing secondary roles (five of them COC Ensemble products) were very fine. Special mention must go to American Mezzo Judith Christin as the laudanum addled town gossip, Mrs. Sedley.

The COC orchestra, under Maestro Johannes Debus played brilliantly. There was impressive ensemble playing from the brasses and lovely playing of the many dissonant passages in the high woodwinds (there's an Eb Clarinet in the orchestra). Concertmaster Marie Bérard and Principal Cellist Bryan Epperson both took beautiful solo turns.

The real stars of the night have to be the Sandra Horst's COC chorus. There's a lot of chorus singing in this opera and, as opera choruses go, it's pretty difficult music. They gave a nuanced performance, sometimes subtle and quiet (some stunning off-stage singing), sometimes very loud and dramatic. They portrayed, to a person, the Borough itself, as a dramatic character and Grimes' real theatrical adversary. 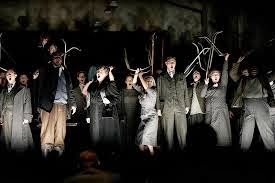 There are five more performances, closing on Oct. 26. I encourage you to attend one of them. This is, all things considered, a wonderful production and we're not likely to see this opera performed again in Toronto any time soon.