Hamilton's Bach-Elgar Choir combined with the Oakville Masterworks Chorus for 4 performances of the Rachmaninov Vespers (properly the All Night Vigil) and 6 Renaissance Motets at Melrose United Church in Hamilton and at ClearView Christian Reformed Church in Oakville. I attended the third of these performances on Friday, May 11.

The Rachmaninov piece is a 15 movement work for a cappella choir which takes more than an hour to perform. In this performance, only the Magnificat was omitted. The choir, a 4 part chorus including basso profundo, must sing in as many as 11 parts. 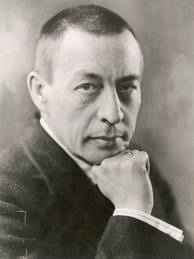 
Most published a cappella music has piano reduction which is marked "For Rehearsal Only". It became clear how far out of their depth these choirs were when Bach-Elgar conductor Alexander Cann began to play along with the singers in the second section while Masterworks Artistic Director Charles Demuyuck conducted.

Put simply, this piece was too demanding for these choirs. There were tuning problems among the choirs, piano and soloists. The men were far from numerous enough as was most evident in the 4-part male voice passages.

I could only sympathize with those choristers who had put in the time to learn their notes and to read and pronounce the enormous amount of Russian text.

Tenor Stanislav Vitort was loud enough to be heard over the 120 choristers. He sang throughout with an overly dramatic approach which seemed at odds with the style one expects in a liturgical piece.

Mezzo Alla Ossipova was vocally impressive in her one short appearance, but gestured inappropriately with one hand while holding her music in the other.

One could speculate about why the Artistic Directors of these two choirs decided to perform the Rachmaninov. A better question is why they chose to sing it four times. They must have known it would be a hard sell. There were nearly as many performers as audience on Friday night and, I was told, it was the same in Oakville last weekend.

After the intermission the choirs, accompanied by 9 brass players, performed 6 Renaissance poly-choral motets by Palestrina, de Lassus and Andrea and Giovanni Gabrieli.

The choirs did better with these pieces which are, to be fair, much less difficult.

As Mr. Cann pointed out, we do not know how these works were performed.
In this performance, the brasses played along with the choirs the entire time. I would have preferred that the choirs sing alone part of the time, the brasses play by themselves sometimes, perhaps having the instrumentalists answering a choir antiphonally. There are many possibilities. The pieces are rather similar to the modern ear and a little variety would have better engaged the audience.