Symphony on the Bay

I chose to spend 2 hours of this beautiful afternoon listening to Symphony on the Bay, previously Symphony Hamilton play an impressive and diverse program in their new home at the Burlington Performing Arts Centre. 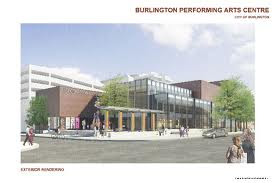 It's a block from the waterfront and a block west of downtown. The centre has a large lobby and the capacity is between 700 and 735 seats, depending on the set-up (i.e. whether there's a pit.)
It is a beautiful theatre and, with its light wood walls, is  reminiscent of the Four Seasons Centre in Toronto on a smaller scale. 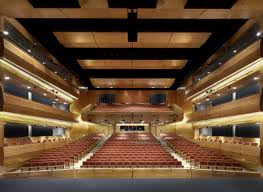 The sound is excellent. One of the ushers told me that he'd stood pretty well everywhere he could and the the sound was uniformly good. I sat on the opposite side of the house from the flute soloist and at times I had some difficulty hearing her, but she was nearly as far to the audience's left as I was to the right. The harp, only a metre closer to me was perfectly audible.

They opened with the Dances sacrée et profane, by Debussy for harp and strings. The soloist was Erica Goodman. It's not a work with which I was familiar but contains many of the attributes of other mid-period Debussy pieces like whole tone scales and adventurous non-functional harmonies. Erica Goodman must have played it many times and communicated the music very effectively. The strings played accurately, convincingly supporting the soloist.

She was joined by Suzanne Shulman (in a matching outfit!) for the Mozart Concerto for Flute and Harp. It never ceases to amaze me that a community orchestra is able to present high profile soloists who one might otherwise hear with performing with a professional orchestra. These soloists obviously have established a fine rapport and played the piece beautifully, especially the glorious slow movement. There were some tuning problems in the violins in the faster passages of the finale but, otherwise, the orchestra played well.


The second half was the Tchaikovsky Symphony #4. I must admit to having outgrown my fascination with this composer in my 'teens and, even then, this isn't one of my favourite Tchaik' works. However, the orchestra has played it before and it showed. The opening brass fanfares were impressive. The strings achieved fine unisons in the running passages in the finale. The only tuning problems occurred, not in the violins where they might be expected, but rather in exposed 'cello melodies. Special kudos to principal bassoon Sandy Wilson and principal clarinet Zoltan Kalman, both of whom played wonderfully in their solo passages. It was, altogether, a impressive performance for this community orchestra.

Much of the credit must go to Maestro James McKay. His years of experience working with student and community orchestras have clearly taught him what repertoire is appropriate for the ensembles with which he works. It's very well to program overly difficult music simply because the musicians want the challenge and wish to have played more varied repertoire but when a conductor does that, he is taking a risk. McKay chooses the music carefully for this group ensuring that the orchestra is within its realm of expertise, neither annoying the audience with near misses nor potentially embarrassing the musicians.

Certainly, the new venue helped the orchestra to be better heard, and I'll go back to hear Valerie Tryon play the Lizst Concerto #1 and the Rachmaninoff Symphony #2 on May 6.